The Bunker to Bonneville 50k, a race on the Washington side of the Gorge, has been on my radar for a few years now.  In fact, I was registered last year, but was a DNS, due to feeling a little burnt out by the time race day came around.  This year I didn't register since it would have been too much with Waldo and Pine to Palm on the schedule.  However, after only getting in 30 miles at Waldo, I suddenly needed more miles and something to boost my confidence.  The race was full but I emailed the RD as soon as I got home from the central Cascades.  I merely asked about a wait list but received an email back that I was in!

I won't exactly say this race was a training run.  I planned to run it as hard as I could.  But since I wasn't exactly tapered, I'll call it a practice run.  In particular I wanted to make sure I could hit 28 miles in 7 hours or under - the same mileage and time of the first cutoff at Pine to Palm.  So I wasn't in peak racing form. 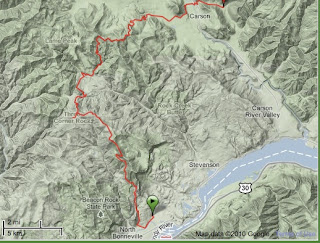 One of the highlights of the day actually happened before the race.  I really wish I had a picture.  On the drive out to the start, the sun was just barely beginning to rise as I crossed the Bridge of the Gods.  To my left, in the west,  I could see the glow of the full moon on the inky water.  To my right,  I could see down the Gorge to a glimmer of light in the east.  So beautiful!

The organization of this small, Columbia Gorge running club sponsored race was excellent.  We were shuttle inland to the start where I mingled with old friends and chatted with new friends.  I didn't know until the end, but one guy turned out to be the husband of a colleague in a different department.  It was a little chilly, but the day would be hot, so I dumped my jacket and sleeves in my drop bag that would be taken to mile 15.  I don't generally use a drop for a 50k, but took it as another opportunity to practice with some new foods, this time pear fruit cups.

The race starts on a paved road.  As soon as Anna said start, everyone took off, even the slower folks that I usually keep pace with.  I thought it was a bit odd, but I soon realized why. After a quarter mile we turned on to single track. And I was stuck behind a long train.  The pace was fine for a little bit but after a while I needed to move a bit faster so I started passing people. Then we crossed a road which gave me a chance to pass a few more.  I didn't really like having to put on bursts of speed at the beginning of a race but it had to be done.  Soon I was home free and then we had some nice downhill so I was able to comfortably cruise.

After about 5 miles we started to climb.  I remembered Yassine's advice for Pine to Palm...power hike but run as much of the flat parts of the switchbacks as possible. So that's what I did.  I felt like I was making good progress but soon I could hear people a few switchback below me.  And before long they had passed me like I was standing still.  Around this time I realized my legs were pretty tired and I wasn't power hiking to the best of my ability.  So I tried to turn off the "I suck" voice and just do the best I could for the day.


While I got passed quite a bit on the uphills, I do feel like I redeemed myself on the downhills.  This picture above looks like I'm leisurely strolling into the aid station.  But in fact, I'd just been pounding the last mile or two on rocky scree trail.  I wanted to hit the downhills as hard as possible and I was still working on getting to 28 miles by the 7 hour mark.  It would be close.  I blew through this aid station pretty quickly, just stopping to grab some watermelon to go, and headed back down the hill.  I still had 5 miles of rocky trail, plus a mile of pavement, to go.

If I recall correctly, I passed at least 6 to 8 people heading down the hill, some that had passed me going up earlier in the race and a few I hadn't seen since the start.  I pushed harder than I usually would for this late in a 50k and for the conditions of the trail.  My last 4 miles were 10 min/pace or under which is pretty fast for me in a 50k on rocky trail.  I pretty much spent the next 5 miles (as I had the previous 1 or 2) with my eyes down scanning the trail.  Stan, who had marked the course, actually marked every mile too.  I did in fact make 28 miles just shy of 7 hours.  While I was happy to make that goal, I felt like I should have gotten there sooner.

Finally with about a mile to go I got to the bottom of the hill and hit pavement.  I knew we finished on road but I didn't realize it was still a full mile.  Having met my 28miles/7hour goal with mixed feelings, I wanted to salvage what self dignity I had left and finish under 7:30.  It was going to be close and landing on flat pavement with dead legs wasn't going to help.  I wanted to walk so bad, but that just wasn't going to happen.  The car-free road twisted and turned a bit and I tried to run the tangents as best I could.  Up ahead I saw a gal I had been trading places with since the first uphill and I slowly reeled her in.  Or she came back to me, I don't know, but I slowly got closer.

Finally I saw the turn up the driveway to the finish.  With only about 100 ft to go I passed her on the inside curve.  At the same moment, Yassine was leaving, sitting in the passanger seat of a car.  He started cheering for me and I slowed up just a bit to give him a high five and the gal ended up finishing a few seconds ahead of me. But I didn't mind...I reached my final goal and finished in 7:28:57.

So overall, I suppose this race was a success. Did it boost my confidence for Pine to Palm?  Maybe a little bit.  I did have fun, enjoyed the usual camaraderie and was glad to finally be able to run this course. I'll be back for sure. I met most of my training goals too. However, perhaps I was in a bad mood, but I feel like I should have been faster, especially after a summer of training on mountain trails. This feeling is definitely something I'll have to revisit.   What do I want to get out of ultra running?  Fun, speed, experience, pain, accomplishment, elation, camaraderie, fitness, spiritual enlightenment, all of the above?
posted by Sarah

I know it's hard to turn that "I suck" voice off, or at least down, but that's the key. The key to keep pushing and hoping for a change, or even when the change not likely to come, the key to at least refocus and enjoy. Good job putting your head down! And I love the description of a sunrise, I miss those over the Gorge so much...

I love that you were able to turn of the "I suck" voice. I think we all struggle with that during these races. Sounds like it was a good practice run!

You are quite an amazing runner, Sarah. Your tenacity is amazing, not to mention your love of trails.

Way to push at the end...that is really impressive.

Sorry I'm late to this!! October has been a zoo.

Hope your training is going well!